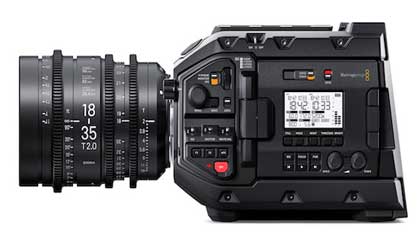 While we have more options and more technology than ever before; buying a new camera has never been more difficult. It’s not just that there are dozens of cameras to choose from, it’s that each one offers something different, while at the same time sacrificing other desirable features. Before you consider any camera, you need to know about the features and options you’ll require.

To start, you’ll need to know what the final resolution of your video or film needs to be. If a 4K final product isn’t needed, you might not need it as a feature. In many places, like here in the United States, we don’t broadcast anything in a higher resolution than HD on TV. Fortunately, shooting in a higher resolution like 4K should deliver a sharper final video when producing for HD delivery. It allows you to crop in and not lose resolution. In the best cases, the added flexibility to crop, zoom or pan a shot without resolution loss is be a big deal. In other situations, it can make shooters lazy, since they know it’s easier to fix problems in post. Higher resolutions also add to the size of the files and the resources needed to work with such footage in post-production.

As technology has progressed, we’re now also starting to see more sensors capable of higher than 4K resolutions, with the newest models offering recording modes of up to 8K. These higher resolutions amplify both the benefits and drawbacks of 4K shooting and will likely be used only in high-end productions, at least for now.

If you’re considering a 4K capable camera, you should be aware that there are two flavors of 4K: UHD and DCI 4K. DCI has 256 more horizontal pixels than UHD. DCI is the cinema standard, whereas UHD is the consumer standard, and the most prolific.

Generally speaking, most cameras are priced based on their sensor size. The smaller the sensor, the more likely that the camera housing will be affordable. This is because the sensor is one of the most expensive parts of a camera.

Sensor size is most apparent in the way it affects the field-of-view of a shot. Smaller sensors come with a crop factor, which is used to figure a lens’ effective focal length when used with that sensor. The effective focal length of a lens is based on the standard of 35mm photo film. A full frame sensor is considered full-frame because it’s the same size as actual 35mm film. Full frame sensors, therefore, do not have a crop factor. The focal length listed on lenses is based on that 35mm standard, so it will correlate to the actual field of view captured by the lens when paired with a full frame sensor.

Cameras using full frame sensors will generally be more expensive, but there are several other common sensor sizes that you might encounter. The first is Micro Four Thirds. This is one of the smallest sensors offered on interchangeable-lens cameras. Its crop factor is 2x. With that crop, a 24 millimeter (mm) lens will have an effective focal length of 48mm, meaning shooters will have a narrower field of view and will have to back the camera further away from the subject to achieve the same framing.

The next sensor size to understand is APS-C. It has a 1.6x or 1.5x crop factor depending on the manufacturer. With a 24mm lens, you have an effective focal length of about 38mm when factoring in the crop.

A very similar sensor size to APS-C is Super 35. Super 35 has a crop factor of 1.4x to 1.5x crop, again depending on the manufacturer. A 24mm lens would have an effective focal length of 36mm using a Super 35 sensor. Super 35 is the most common sensor size in high-end digital cinema cameras and emulates Super 35 motion picture film. If you want to achieve the closest possible look to a Hollywood film, this is the sensor size for you.